Hey, you, get off of my chesterfield sofa

To celebrate this remarkable achievement, the super group has embarked on a new tour. Understandably this tour is grand, not in terms of the number of gigs they’ll perform, which is limited to 5, but in terms of the scale and the cost of the spectacle. When it comes to cost, the Stones are definitely chart-toppers: tickets are rumoured to have changed hands for hundreds of pounds, meaning only the rich, famous or truly dedicated get to see the aging rockers. Still, we’ve had the opportunity to witness some of the bands antics in the fascinating documentary ‘Crossfire Hurricane.’ This intimate portrait of one of the world’s most enduring rock bands charted the stellar rise of the Stones, from blues-obsessed teenagers growing up in London in the early 60s, to multi-million-selling stadium rockers. Some will no doubt have been shocked by some of the revelations, but we guess it comes with the territory. What we found more intriguing was the bands’ fondness for the chesterfield sofa. If we’re honest we hadn’t noticed it before, but chesterfield sofas do seem to feature prominently in many of the band’s videos and promotional material. 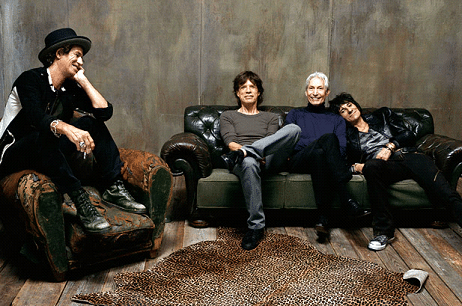 Their latest single, ‘Doom and Gloom’ from the greatest hits album, Grrr, is the perfect case in point. Yes Mick looks the part prancing around like an eternal teenager, and Ronnie and Keith look like regular rockers, but we just couldn’t take our eyes off the lovely black leather chesterfield sofa on the set. We’d quite happily watch the video over and over again just to get a glimpse of that little beauty. This apparent obsession with chesterfield furniture doesn’t end there either. The BBC did a special One Show tribute to the band last Friday, interviewing all four members. They all chose to sit on different chairs, but interestingly Charlie Watt opted for a rather large chesterfield tub chair. We’re not sure about the pink leather finish, but each to their own. So congratulations to the Stones on their remarkable achievements. They’ve certainly demonstrated that they were not just a Jumping Jack flash in the pan. Like the chesterfield sofa, they remain as popular as ever, and will continue to attract new generations of fans. Here’s to the next 50 years, but somehow we doubt they’ll ever challenge the chesterfield’s longevity.]]>