Comic Relief night then stand up and take a bow, or ‘sit down’ and at least give yourself a pat on the back. 75 million pounds in donations is astonishing, particularly in such a prolonged recession. The kindness and generosity of the British public, it appears, knows no bounds. However, if you watched the programme then you’ll have noticed two things. Firstly the show itself wasn’t the best there’s ever been, but in fairness it must be hard to come up with new ideas every two years to promote the same charitable cause. Secondly, you’ll have noticed straight away that the reference to the red velvet chesterfield sofa in last week’s blog was way off the mark. Yes it was red, but it was leather, not velvet. Still that’s probably just nit-picking. Whether it was velvet or leather, it was beauty all right. If you ever wanted an advert for a product, then you couldn’t really have asked for anything more. The beautiful crafted red leather chesterfield bagged a good 5 minute slot during comedian, Peter Kay’s national charity escapade, and then a further 3 minutes later on when it appeared in the studio, and a final 3 minute guest appearance in the video with James’ frontman, Tim Booth. As endorsements go, that’s definitely value for money. 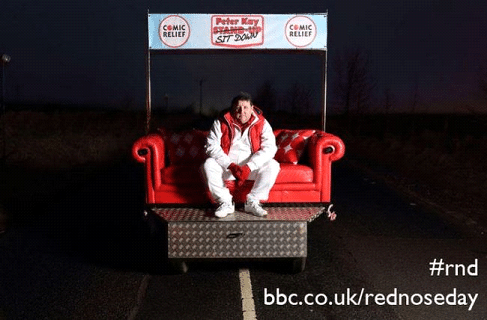 The irony that probably won’t have been lost on you is that he kept repeating his famous mantra ‘oh sit down’ all the way through the song, yet rarely took his own advice. What a waste. Why wouldn’t you want to sit on such an enticing and inviting chesterfield sofa? If we’d been on the show we would remained seated throughout. No wonder Peter Kay set himself that challenge. He probably knew his touring sofa was a chesterfield settee. Did he insist on the red leather? Well, you’d have to ask him. So although the programme may not have been the best, the result was what everyone wanted. Millions of pounds were donated to charity, and precious minutes were devoted to the iconic chesterfield sofa. That has to be a result. Perhaps the organisers should auction off the chesterfield sofa next to add to the coffers. We’re sure with its long pedigree and its recent ‘history’ that red leather chesterfield sofa would fetch a small fortune.]]>