Chesterfield sofa: what makes yours beautiful?

One Direction? No? That doesn’t really come as too much of a surprise. For those of you who haven’t, and we’d hazard a guess that that would apply to almost everyone over the age of 25, they’re the latest ‘boy band’. Yes, that dreaded term, ‘boy band’: it’s a phrase that strikes fear into the hearts of every parent, conjuring up images of screaming adolescents and teenage tantrums. Well, like every boy band worth their salt, they’re rarely out of the news. History suggests that their shelf-life, like virtually every other boy band, will be brief, so naturally they’re making hay whilst the sun shines and grabbing every publicity opportunity available. They’ve recently been on a world tour to promote their second album and have performed in a number of sell-out shows in the Antipodes. Now you’d think that a young modern group would choose a contemporary stage set wouldn’t you; something fashionable and current to go with their contemporary image? So it seems strange that the band should choose to share the stage and the screen with a traditional chesterfield sofa. The leather chesterfield was used in both the video for their latest song ‘One Thing’ and featured in each of their New Zealand shows. We kind of like the contradiction here: old versus young – traditional versus contemporary. We can certainly spot the irony in the choice of furnishings: a transient and short-lived musical act choosing a timeless and ageless design classic. It’s just a pity the group’s management team didn’t. Anyway, One Direction have left the southern hemisphere and have headed back in this direction. The tour has definitely left a legacy mind you, but it’s now the chesterfield sofa that’s making the headlines, not the group. The group’s management hired the leather chesterfield sofa from an antiques dealer in Auckland, and he has now put the sofa up for auction. Naturally it’s causing quite a stir. The seller, who wishes to rename anonymous, is hoping to generate in excess of $10,000. Can it really be worth that much just because 5 young men have sat on it? Is that what makes it beautiful? Well, actually no, it isn’t. The chesterfield sofa has also featured in the Hollywood film, ‘Emperor’ so it’s doubly famous. What’s more it is beautiful in its own right. It may be drastically overvalued compared to one of our chesterfield sofas, but we’re sure the winning bidder will be happy enough to pay the price. Besides, they’ll have the added satisfaction of knowing that the chesterfield settee will still be going strong long after One Direction hang up their microphones. Form is temporary, but class is permanent. 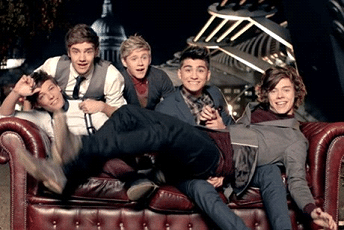