So how did the newly-crowned NME Godlike-Genius choose to be portrayed? Why with another British icon, of course – the chesterfield sofa. Mind you there’s already form there. Johnny’s not the first, and we’re absolutely certain he won’t be the last to choose to be associated with one of Britain’s legendary and classiest products. The Modfather of Soul himself, Paul Weller, has already trodden that path and been photographed astride a chesterfield tub chair in a publicity shoot for Liam Gallagher’s bespoke fashion label, Pretty Green. 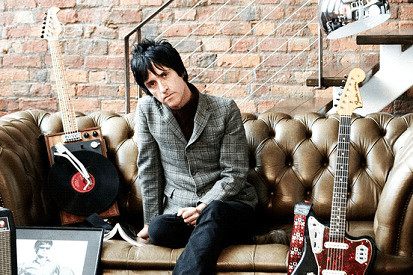 Buy why choose a chesterfield sofa? Well, apart from the fact that a leather chesterfield sofa looks fantastic and is a handsome devil, it’s also quintessentially British. It’s a quality product with enduring appeal. It’s also stylish and cool, so we’d say it’s an obvious choice: iconic sofa – iconic musician. Yet you’re probably thinking, yes but that has to come at a price surely. You can’t get class and style without stumping up big bucks, can you? Well, actually you can. Chesterfield sofas are surprisingly affordable. For the price of one of Johnny Marr’s Fender Jaguar guitars, you could buy a pristine leather chesterfield sofa. Now, that’s what you call value for money in our opinion.]]>